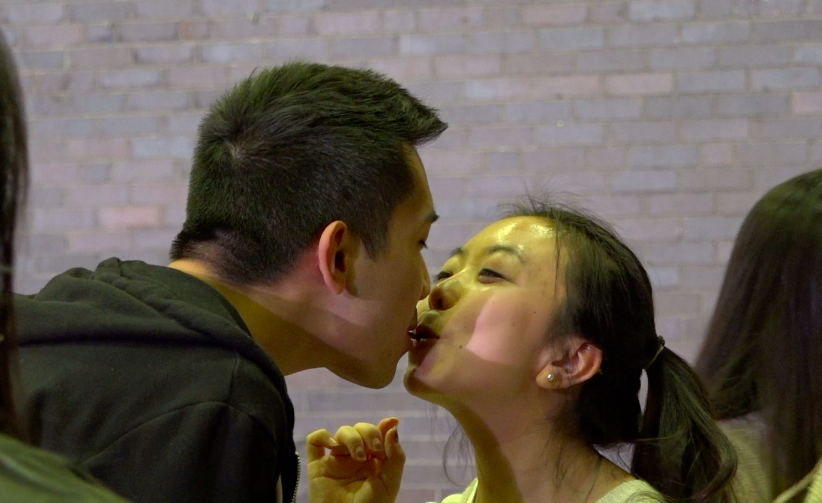 On November 12, 2017, Brian Lee, a senior student at Boston University Questrom School of Business in Boston, Mass., was playing game with his girlfriend Leslie Wan at the Second Annual Singles Day event.

Boston — November 11 or Singles Day started as an Anti-Valentine’s Day in the 1990s in China where young people celebrate single-hood. Singles day has since caught on in the U.S. This year, the Chinese Students Association at Boston University held the Second Annual Singles Day to celebrate diverse cultures.

November 11, which looks like four singles, is also called “Bare Sticks Holiday” in China. This day reflects the gender imbalance caused by One Child Policy from 1978 to 2016. Many families aborted or abandoned girls to ensure the only child was a son. Sociologists estimated that the gender imbalance will reach 35 million by 2020, and one in four males in their late 30s in China will not have never been married.

Since 2009, Alibab a has turned Singles Day into the biggest online shopping holiday on the planet. On November 11 this year, Alibaba hit a new record of $25.3 billion sales, twice the sales of Black Friday and Cyber Monday.

The party consisted of games designed for couples, Asian foods, and performances. But the event was not limited to singles.

Chelsea Hu is a member of CSA. She said, “I know in China, it’s more like a day for singles to go online and buy stuff. But we want to bring people here, whether they are singles or not, just to play games, spread some Asian cultures and Asian foods, and get everyone together here.”

Brian Lee, a senior student at Questrom School of Business of Boston University, is not a single. He came to this event with his girlfriend, one of the organizers at CSA.

“It could be for singles, but as the event page mentioned, it’s not just for singles, it could be just for people to spend time together. And I am here to show my support for my girlfriend,” said Lee.

Lee said, “Most Chinese parents are very traditional in their points of views and perspectives. They focus so much on academics and stuff. I grew up accepting that, but I also adapt to American culture because my parents are, fortunately, not too traditional. They are also really American,” said Lee, “So I have good mix of both. I consider myself a pretty good example of Chinese American, not too Chinese, not too American. So I am a good balance.”

There are many second-generation Asian Americans in CSA who share similar background, values, and experiences.

Besides Asian Americans like Brian Lee, other Americans and international students were also welcomed.

A member of CSA Chelsea Hu said, “You don’t have to be Chinese. Anyone who has an interest in Asian culture or people just want a group of people to connect and be friends with can come.”

Akinori Miura, a Cambodian involved in CSA, said, “So that’s also the uniqueness about CSA. We accept everyone who shares the same ideas and beliefs.”