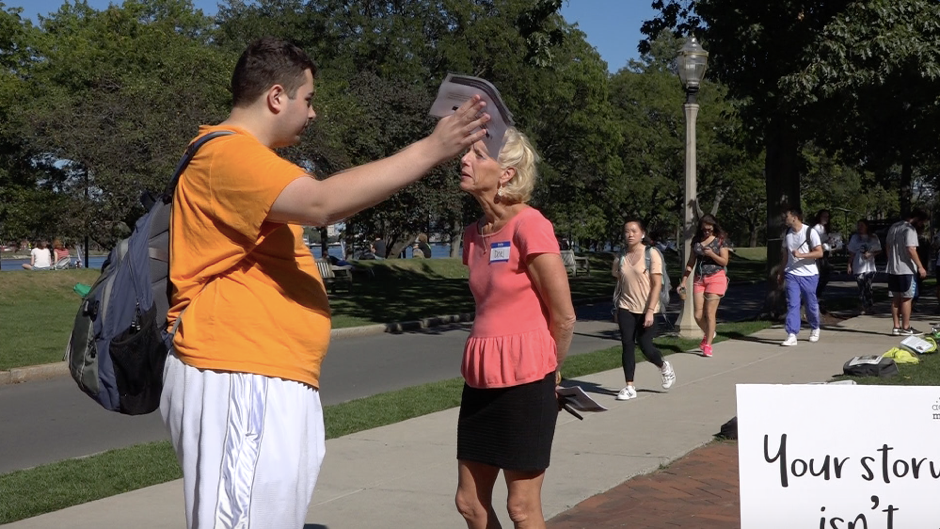 At Send Silence Packing exhibition at BU where backpacks of students who have taken their lives were displayed, Felipe Cheman (left) talks Dori Hutchinson, the Director of Services of BU Center for Psychological Rehabilitation on September 28, 2017.

Boston – On September 28, Active Minds, a nonprofit organization that encourages college students to discuss mental illness, held Send Silence Packing event at BU Beach, displaying a thousand backpacks of students who have taken their own lives.

“The statistics are that a thousand students commit suicide every year, on college campuses, so we have a thousand backpacks right now,” said Caitlin Stavish, the President of Boston University Active Minds, “about a fifth of them were actually donated by families of victims, and have personal stories attached to them, which is really powerful.”

U.S. Center for Disease Control and Prevention reported that there were over 41,149 suicides in 2013, which means that 113 suicides each day, and that suicide is the second leading cause of death among people aged between 15 and 34 in 2015.

However, 40 percent of college students with mental health issues did not ask for help, according to a 2012 National Alliance on Mental Illness survey.

“You hear about suicide. It’s a very taboo topic, in America, in general, especially on college campuses. You know it does happen, but you never really hear about it often other than one time a kid does commit suicide, then, you hear about it all over the campus,” said Bradley Noble, a student majoring International Relations at BU.

“I think students feel ashamed of particularly in today’s world, of not being good at everything,” Dori Hutchinson, the Director of Services of BU Center for Psychological Rehabilitation, said, “If I have this internal distresses going on, people feel ashamed of that.”

Margaret Ross, the Medical Director of Center for BU Anxiety and Related Disorders, said that not all suicides are impulsive acts. Instead, some are the results of “thinking, planning, and disappointments.”

“I’ve known a couple of people who made very serious suicide attempts and then when they survived, said they were very, very glad that they had survived,” Ross said.