FEATURE | Anti-abortion Youth: Praying for Women, Not Shaming Them 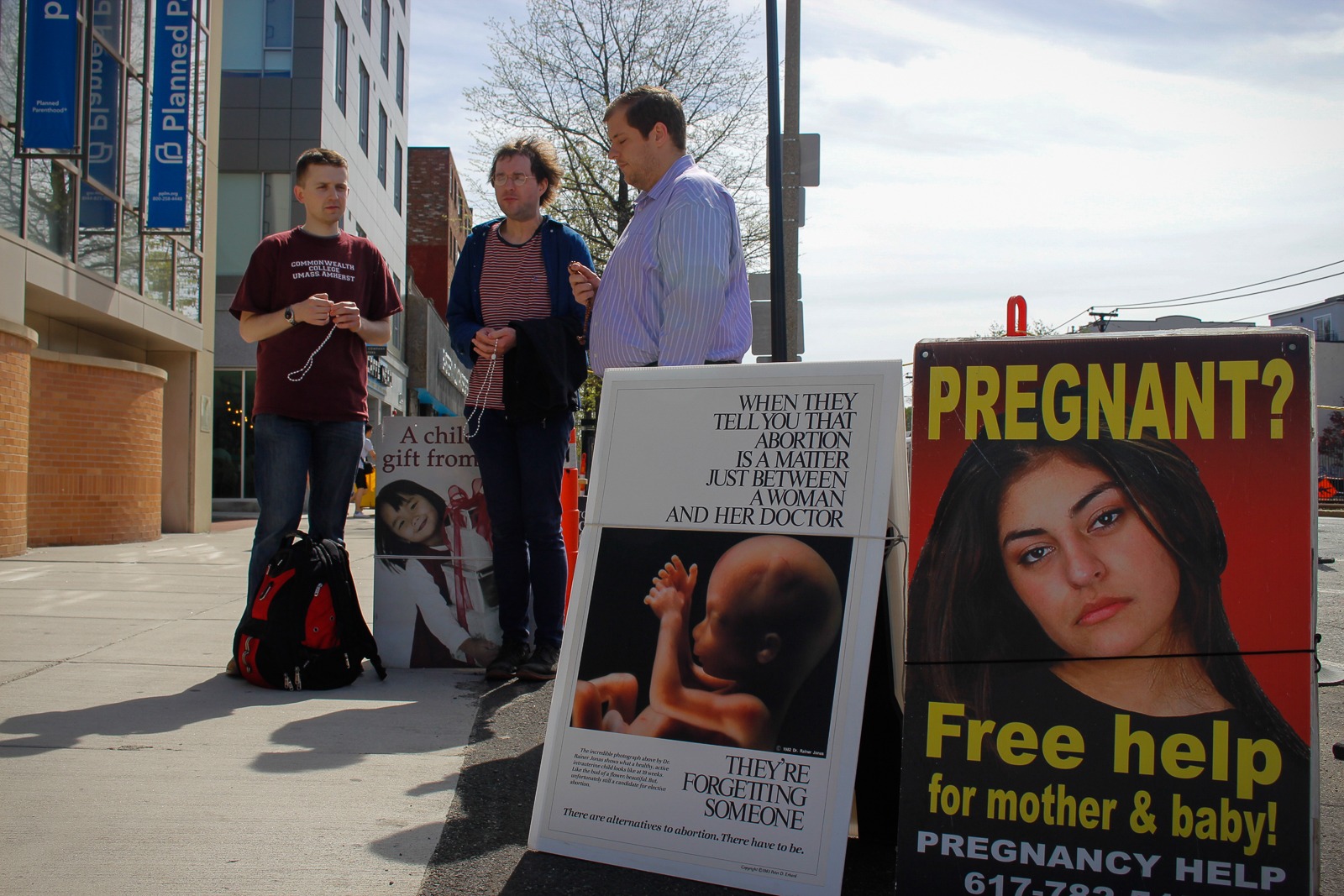 Pete Donovan stands alone on the edge of the Commonwealth Avenue sidewalk outside the Planned Parenthood, gripping a rosary in his hands, and murmuring prayer with closed eyes. The northeastern chill in early spring blows on his high-bone cheeks and rosy nose, and dries his hands, but he stands motionless. This has become his routine for every Saturday. Sometimes, he comes alone; sometimes, he comes with one or two of his friends.

Donovan is a 27-year-old anti-abortion Catholic, 6-feet tall, slim, with a dark green woolen beanie hat and a red scarf. He always has a soft smile. He prefers to be alone outside Planned Parenthood so that passers-by will not feel threatened.

When a woman is going to enter the clinic, some older anti-abortion people chase and swarm around her, shouting, “You are killing your baby!” Donovan thinks to himself, “Please. Calm down. We’re not really going to win people over that way. You’re not going to get them to change their mind. You’re only going to make them go in more.”

Donovan believes subtlety is more powerful: standing there peacefully rather than harassing women may be more effective to change their minds. “What they want to do is shameful, but we don’t want to shame them,” Donovan said, “because we don’t know where they come from. We can’t just assume they just want to kill their baby.”

But sometimes, focusing on praying is difficult. As he recalls, once a woman passer-by stared at him and yelled at him, “This is safe space! What are you doing here?” Donovan answered, “Well, I have a constitutional right to be here. I am praying, hoping this facility will be closed, and there will be no abortion in this country anymore.” The woman said, “If I were pregnant with you, I would have aborted you!” Donovan was shocked. For him, this was the most random thing he has ever heard. He didn’t argue with her, but thought, “How can you know what I would stand for if I were just in the moon?” He resumed his focus on the prayer.

In 2014, 652,639 induced abortions were reported to the Center for Disease Control and Prevention (CDC); about 12 out of 1000 women between 15 and 44 years old had an abortion that year, and most of them were in their twenties.

In the U.S., abortion has stirred debate for decades. The key debate lies in when life begins. There is no consensus in medicine, philosophy, and theology about the precise stage when a fetus should be seen as a person — with the right to life. In Massachusetts, women more than 24-weeks pregnant are not allowed to have abortion, except in case the woman’s life is endangered by the pregnancy.

Donovan believes that life begins at conception, as the embryo is formed and the process of the development will not stop until death. But he thinks abortion to save the life of the woman is fine.

Donovan grew up in a Catholic family. While his parents never go out to protest against abortion in front of clinics, their opinions do influence his view on this issue. Once, he discussed with his father about an undercover video exposed by an employee at Planned Parenthood where a 15-year-old girl was taught how to have safe sex. His father couldn’t stand it, calling the teaching “perverted,” “outrageous” abuse. His mother did put herself in the shoes of those women going through abortion.

But Donovan didn’t practice Catholicism much until he became a college student and rediscovered his faith. He studied English at Fairfield University, a Catholic school, for two years, but he quit because he was not into the subject and his academic grades were not satisfying. “My mind doesn’t have academic punch,” he said. A year later, he transferred to Montserrat College of Art, a secular college, to study graphic design. The Catholic church behind his dorm rang bells every day, reminding him of who he is.

In the art school, he realized what he really stands for — anti-abortion. Before he prayed at Commonwealth, he never made his standpoint overtly until once he was assigned to make a poster with large bold text. He combined the messages of anti-abortion and adoption together as he believes adoption is an alternative for abortion. That was the first time he put himself out there. He fidgeted about how much dissenting opinions he would draw and how his classmates would look at him. But he didn’t get any hostility at school.

He left the art school, as he felt so depleted in front of his computer sketching and fixing graphics all day long. Now, he works for the Star Market at the Prudential Center. He wants to carry on what he did in high school — writing his own songs — and build a music career in the future, spreading religious messages through music.

Currently, he is more involved in anti-abortion activities. After he came back to his faith, his understanding of anti-abortion changed – abortion should not be allowed in circumstances of deformity or rape.

In the U.S., one in every 33 babies were born with a birth defect, which is the second leading cause of infant death. The medical care for children with disabilities caused by birth defects is costly — over $1.4 billion each year.The abortion rate of Down Syndrome fetuses is about 75 percent.

Donovan questioned why deformity would be considered incompatible with the rest of the populations numbers, and why the disabled person just doesn't belong in society.

He said, “We believe all humans should be brought to term regardless of deformities they might have. Certainly, with the way science is advanced over the years, there's so many treatment options out there.”

In January, he went to the March for Life rally in Washington D.C. on his own. He remembers that, at the rally, he met a group of women who were conceived through rape. This encounter reinforced his belief even more.

“Babies are so vulnerable. It can feel pain and has no idea what’s happening to it at all. Why should it be punished and murdered for the sin and crime of someone else?” said Donovan.

Donovan’s friend Mariana Fernandez, who works at a local hospital and prepares surgeries for patients, came to know Donovan during Bible study a year and a half ago.

Fernandez said, “He is always willing to put others first over himself. This is very rare quality to find in somebody. He always thinks about how we can help other people.”

Donovan and Fernandez are devoted to anti-abortion advocacy and share the same belief that nobody has the right to determine if someone else is worthy to live. Fernandez asked Donovan and her other friends to pray for women who are having an abortion.

“He is very peaceful, and just knows what is right. It doesn’t matter what’s the cost and what people say to him,” Fernandez said. “He really takes his cause in his heart and carries the cause into action.”

These Catholic young people understand that many women go for abortion because they have hardships in their lives and have no support to give birth to and raise children. They believe that women who are pushed by poverty to have abortions really don’t have the so-called “choices.”

Guttmacher Institute’s data shows that 75 percent of patients having abortions in 2014 were poor or low income, and about half of them had incomes of less than federal poverty level.

Fernandez said, “Abortion is not the solution to the systematic issues of poverty.”

When Donovan prays at Commonwealth Avenue, he gives women business cards, on which green letters stand out — Pregnancy Help Boston. This organization provides pregnancy testing, ultrasound, counseling, and adoption support for women in pregnancy crisis. Donovan is contemplating volunteering at these facilities to help these women.

Donovan said, “Sometimes you just get a bit unpleasant, but I've come to find very quickly that it's actually very rewarding at the end of that. When you're done, you feel like you know it's good that I came out.”